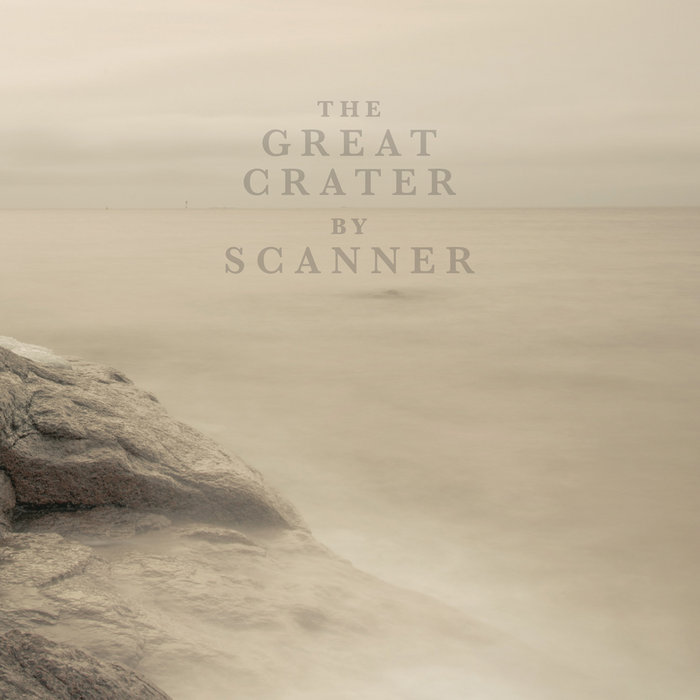 CHJU The feeling of the music is both of immense scale from the thundering bottomless chasms, the loneliness of the endless monochrome horizons of snow and perhaps even spiritual emotions of loss from music passages so subliminally delicate as reminding one of passages from Berlioz's Requiem. Though the world we experience through this album is cold and dead the music carries glimpses of hope and soaring emotion. This pearl of an album is breath of fresh(cool) air. Favorite track: Moving Forwards.

Over the last twenty give years Robin Rimbaud – Scanner has traversed the experimental terrain between sound, space and image, connecting a bewilderingly diverse array of genres – a partial list would include sound design, film scores, computer music, avant garde, contemporary composition, large-scale multimedia performances, product design, architecture, fashion design, rock music and jazz.With a catalogue busy with commissions, soundtracks and studio releases it’s extremely rare to find a new studio recording, so The Great Crater stands out by measure of this. Invited by the label Glacial Movements to create a new album he focused on the tale of strange circles appearing in Antarctica. Flying overhead in 2014 a group of scientists spotted a circular formation of 2km diameter. For a time it was thought that it could be the scar left by a crashing meteorite but in fact it was quite another story. Investigating the circle on foot in January 2016 scientists found a 3metre deep depression, with vertical well-like shafts in the middle. Drilling into the ice they found multiple lakes beneath the surface, as part of a ‘hot spot’ or melting ice sheet. There is growing concern that it could lead to further disintegration. The album explores an immersive, fragile and moving exploration of themes inspired by this simple tale. At moments the ice moves and a sonic scar if formed, at others the chill wind blows across the exposed water. The Great Crater offers up the voice of a unique composer in an ever unsettled global landscape.


Robin Rimbaud, alias Scanner (1964, London, UK) is a composer whose work traverses the experimental terrain between sound, space and image, creating absorbing, multilayered sound pieces that twist technology in unconventional ways, connecting a bewilderingly diverse array of genres. Since 1991 he has been intensely active in sonic art, producing concerts, installations and recordings, the albums Mass Observation (1994), Delivery (1997), and The Garden is Full of Metal (1998) hailed by critics as innovative and inspirational works of contemporary electronic music.
Committed to working with cutting edge practitioners he has collaborated on projects with Bryan Ferry, Wayne MacGregor, Merce Cunningham, Mike Kelley, Miroslaw Balka, Torres, Michael Nyman, Carsten Nicolai, Steve McQueen, Stella McCartney, Laurie Anderson and Hussein Chalayan, amongst others.He scored the hit musical comedy Kirikou & Karaba (2007), designed the sound for the Philips Wake-Up Light (2009), and campaigns for Nike Hyperfuse (2011), Chanel (2012), Sprint Telephones (2012) and Stella McCartney (2016). For the UK Olympics Scanner scored The Big Dance in Trafalgar Square for 1000 dancers and the re-opening of the Stedelijk Museum, Amsterdam, in the company of Queen Beatrix. He continues to tour his show Live_Transmission: Joy Division Reworked, a striking audiovisual show with Heritage Orchestra. In 2014 he was Visiting Artist at MIT in Cambridge USA. In 2015 he premiered his score to Dutch National Ballet’s and ISH’s new production Narnia: The Lion, The Witch and the Wardrobe, and in 2016 installed his Water Drops sound work in Rijeka Airport in Croatia, Ghosts at Cliveden National Trust UK, and scored the world’s first ever Virtual Reality ballet with Dutch National Ballet in summer 2016. His work can be heard on permanent display in the Science Museum London (Sound Curtains), the Raymond Poincaré hospital in Garches, France as part of the bereavement suite (Channel of Flight), The Darwin Centre at the Natural History Museum London and the Northern Neuro Disability Services Centre in Newcastle UK (Turning Light). Sedition Artworks distribute his digital film works online. He has presented projects throughout the United States, South America, Asia, Australia and Europe, and performed and created works in many of the world’s most prestigious spaces including SFMOMA USA, Hayward Gallery London, Pompidou Centre Paris, Tate Modern & Tate Britain London, Palais des Beaux-Arts Lille, Kunsthalle Vienna, Bolshoi Theatre Moscow, Hanoi Opera House Vietnam and the Royal Opera House London.